Those who study the history of religion tell me that back in less enlightened times, a lot of religious practices developed as a way to try to control natural forces.

For instance, if your village was nestled at the foot of a volcano, the thing you feared most was an eruption. So to try to placate the volcano, your religious practices might include sacrificing a pig, performing a ritual dance, or taking whatever action was traditionally prescribed for preventing the goddesses of the earth from raining lava down on your village. 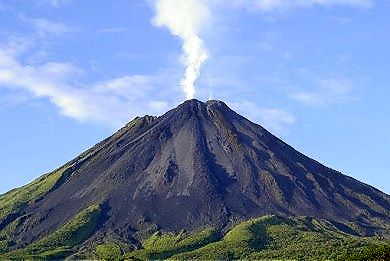 I don’t mean to disparage anyone’s religion, but I think I can safely say that these traditional practices were entirely ineffective. After all, it was a volcano.

One of my patients was telling me that she found herself in an analogous situation. As a child, the most urgent thing in her life was trying to control her father’s drunken outbursts. At the time, she believed that her actions could influence her dad’s behavior.

I think I can safely say that her efforts were entirely ineffective. After all, her dad was an abusive alcoholic. It was inevitable that he was going to erupt from time to time.

Not only were her efforts hopeless, but in the end, as an adult, the person she harmed the most was herself. Her father is no longer in the picture, but, like most of us, she’s now got her own inner volcano.

Not everyone has an “inner volcano.”  Some people have an inner deep, dark, lonely cave.  Others have a bottomless cesspool of muck.  You get the idea – we all have feelings that make us uncomfortable. We all have parts of ourselves that we don’t like. We’re all vulnerable to emotional triggers that set off a nearly automatic chain reaction that’s difficult to control.

Some people indulge themselves in their loss of emotional control, imagining that they’re expressing their inner feelings in a beneficial way, when in fact they’re making themselves into a bigger mess.

Another strategy is to try to placate your inner volcano:  Avoid people or situations that push your buttons. Tamp down feelings. Devise personal rituals that distract you from your emotions.

To a degree, these strategies are valuable. No one should leave himself or herself vulnerable to negative, out of control emotional swings. But placating only takes you so far.

The scientists who study volcanoes have helped us to be far, far better off than before. We still can’t control volcanic action, but we can implement warning systems and take safety precautions. Meanwhile, we’ve begun to learn to tap geothermal energy – the heat that drives volcanoes – for beneficial purposes.

That’s all an individual can do, too. At some point you have to learn more about yourself. You can’t perfectly control your feelings, but you can understand them and place them in a more objective context. You can begin to tap their energy for beneficial purposes. That’s the key to personal growth and health.

← My Favorite Hafiz Poem Thought for the Day →