You better be aware of the ingredients in the food you’re putting in your mouth.  Otherwise you’re endangering your health and the health of your family.

American industry is ingenious at finding ways to make things faster and cheaper.  The same ingenuity is applied on a massive scale to the production of food.  Large agricultural companies also lavish funds on lobbying, advertising and public relations to convince the public and regulatory bodies that their products are wholesome.

What’s In My Food?

Other than air, water, and shelter, food is an essential part of life.  We all have to eat in order to survive.  Anthropologists argue about what early human diets were comprised of but today we can generally say they are based on fruits, veggies, meats, grains, and various products derived from these sources of food.

Well, at least they are supposed to be.

The industrial revolution led to an increase in processed food in order to feed the masses.  It’s important to keep our population healthy and make food available for everyone.  The processing of things like wheat led to cereals, breads, and other other baked goods.  Kraft perfected the production of processed American cheese by getting rid of bacteria and molds so that the cheese would last a long time without spoiling, which was greatly appreciated, or at least tolerated, by World War I and II soldiers.

Proud to be “Made in the USA?”

Now we are known for having a weird plastic-like cheese product with unnatural fillers that happens to taste really good on In-n-Out burgers.  (Side note: I used to eat this cheese so much when I was a kid that my family just started calling it Leah cheese.  I would like to let everyone know that my cheese palette has improved since then.)

Over the last century, companies have turned food into “food.”  What exactly is in Cheetos?  And did you know there are 21 types of Cheetos? And, we are almost used to hearing about the strange things being found in our food – pink slime in our beef, arsenic in our chicken, and bovine growth hormone in our milk. This week the Huffington Post posted an article on the “6 Ingredients You May Not Want In Your Food,” listing six ingredients found in common foods that have been processed to the point that I would consider calling them just “products.”  To summarize, these products include: 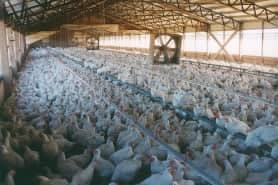 Not So Happy Hens

Another article on weird ingredients in food was published this week in the New York Times Op-Ed section.  “Arsenic in our Chicken?” discusses two recently published studies about chemical testing on chicken feathers.  The idea behind this is that chicken  feathers, like hair and fingernails, collect chemicals that are found in the body.  The purpose for testing chicken feathers this way is to determine what industrial agriculture operations are actually feeding to chickens since they are not very willing to tell the public outright.  Not only was arsenic present but so were caffeine, the active ingredients of Tylenol and Benadryl, illegal antibiotics, and the active ingredients of Prozac (in chickens from China).  Apparently, Benadryl, Tylenol, and Prozac are used to relieve stress in chickens.  Huh.  Maybe if these chickens were not crammed together in close quarters and walking over their dead roommates, they wouldn’t be stressed.  These chickens aren’t scared because the sky is falling – they are scared because their sky is a series of fluorescent lights that are never turned off.

And, of course, I can’t talk about weird ingredients in food without talking about pink slime.  The notorious concoction of ammonia, beef scraps off the floor, and connective tissues that is blended together to form a “lean finely textured beef” and then mixed with hamburger meat was given a lot of attention starting in March when The Daily ran an article on it.  The substance has been around for a while, but more prevalently in the last decade, as shown in a timeline put together by the Food Safety News about the company Beef Products, Inc. (BPI) and its pink slime.  If you ever watched Jamie Oliver’s TV show Food Revolution, you may have seen the episode where he makes this product to show kids and their parents how wrong it really is.  (If you haven’t, you can find it here on YouTube.)  Not only am I disturbed about eating pink slime but there is something morally wrong with a society that has to use these techniques to make food.  In my opinion, we shouldn’t have to be telling companies like BPI that we don’t want pink slime in our food; it never should have been made this way in the first place. Do you agree?

I know organic and sustainable foods have become more mainstream than ever before, but I cannot stress enough the need to have a social shift in the way we make and consume food.  Yes, it is important to have food available for the masses but we need to reconsider the way we raise and process chicken and what sorts of ingredients we are putting in our vanilla ice cream.  We should be able to enjoy food for what it is, not some strange variation of food with filler ingredients that aren’t even made from food.  Part of what Currant Table is trying to do is to support this social shift by bringing more real food to restaurants.

So, what do you think?  Please share your thoughts on what you think should and should not be in food.

← Why people skip the medication they're supposed to take Are antidepressants effective? →