Organic Food Labeling Pisses Me Off

by Aaron Bynen | Oct 8, 2010 | Health Effects of the Environment and Medical System, Politics of Healthcare | 0 comments

You go into a grocery store. There’s a bin of fruit labeled ORGANIC APPLES – $2.49/lb.

Nearby is another bin, with fruits labeled CONVENTIONAL APPLES – $1.49/lb.

It’s an ordinary scenario that’s played out a million times a day. But there’s something deeply disturbing about this picture. Is it just me? Why does it piss me off? 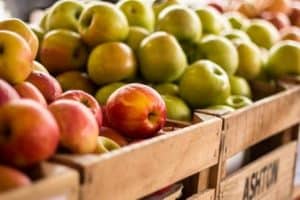 Let’s imagine an alternative universe.
In our imaginary universe, you walk into the grocery store, and there are the same two bins of apples. But now they have two different labels:

APPLES SPRAYED WITH PESTICIDES – WE’LL PAY YOU $1 FOR EVERY POUND YOU EAT!

Which apples would you buy? Are you willing to earn a $1 bonus for exposing yourself (and your children) to a toxic load?


Large food companies spend megabucks lobbying the government about what poisons can or can’t be used in food production. And how foods are labeled. Why? As a public service to make sure people eat healthy foods?

I don’t think so.

What’s even more terrifying is that we’re careening – out of control – down a one way street to disaster. Every day brings

Are high yield, “conventionally-grown” foods as nutritious as organic foods?

Stunt your child’s intelligence with pesticide exposure during pregnancy