Nordic hamstring exercises and why you need them

Hamstring strain is a common athletic injury, especially among athletes who run, jump, and make quick lateral movements.  It can knock you out of competition (or training) for weeks or even months, and take an annoyingly long time to heal.  What’s more, if you return to full activity too soon, the risk of recurrence is high. The injury can also resurface a year or more later.

What’s the best way to prevent a hamstring strain? Or stop the problem from recurring?

What gets overlooked in exercise

When we think about the movements we do and the exercises we practice, we focus mainly on the action we’re making happen – kicking the ball, swinging the racket, pulling ourselves through the water, and all else.

But meanwhile, an awful lot of other muscle activity is taking place:  muscle action to control, organize, support, and decelerate movement.

A lot of the control, organizing and decelerating activity of muscle takes the form of eccentric contraction.

Eccentric contraction refers to muscle activation while the muscle is lengthening, absorbing a force, or decelerating a movement.  Even in “strong” athletes, this control and deceleration aspect of movement can be poorly organized and “weak.”  That’s a recipe for muscle injury.  And the hamstrings in particular are responsible for controlling large forces – decelerating movement of the body as a whole.

Exercise scientists have developed an eccentric training exercise for the hamstrings that’s proven to reduce the incidence of hamstring strain – and prevent the injury from recurring.  It’s called Nordic hamstring curls.

The official way to perform a Nordic hamstring curl requires that you work with a trainer or exercise partner holding your ankles stable.  Keeping her trunk straight, the athlete slowly lowers her body as far as she can before ultimately falling forward to catch her weight with her hands.

With a little imagination, you can find a way to perform the exercise without a partner.  Here’s one creative solution: 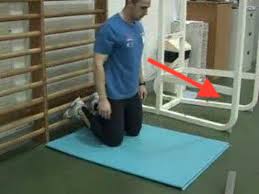 No doubt you can design your own variation depending on the equipment you have available.

If you practice this exercise regularly, your hamstrings will be much happier!

Tendonitis symptoms and our new base of knowledge