Gain Control Over Depression and Anxiety

I recently had an illuminating conversation with a top business communication coach.  She helps high-performing investment bankers deal effectively with feelings of anxiety, fear, and depression – whatever emotions come up – so they can contribute more effectively to their company. 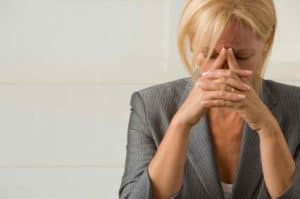 Does this picture feel familiar?

She has such a deep understanding of these issues that she’s able to express complicated and important ideas simply.  I love that.  I’ve asked her to write an article for me – some day I hope she will. In the meantime I’ll do my best to paraphrase what she had to say.

Depression and anxiety are two common negative mental attitudes that people adopt when under stress, she says.  In a way, they’re variations of the same theme.

What these two mental states have in common is you’re feeling a loss of control over your situation.  Not surprisingly, anxiety and depression are often found to alternate in the same person.

If you’re spending too much of your day feeling depressed, anxious, or both, you’re not functioning effectively at work or in your personal life.  And your health suffers too.

The sobering truth is that there are always aspects of your situation over which you have no control.  But there are other areas – perhaps small ones – over which you do have control.  The first step is to identify those areas that you can influence.  Then, rather than regretting the past or fearing the future, it’s fairly straightforward to take action in one or more of those areas.

Taking reasonable action is the antidote to anxiety and depression.  If you’ve understood your situation from a more balanced perspective and then taken control of some piece of the situation – even a small piece – to try to move toward your goals, you’ll essentially be immune to the negative effects of depression or anxiety.

Masters of the universe?

Some people aren’t prone to anxiety or depression.  Instead, they have an opposite mental distortion – the attitude that they’re masters of their own universe, and that everything that happens is the direct result of their actions.  This illusion is just as injurious as the feeling that you have zero control.  People who view themselves as “masters of the universe” can be subject to grandiosity and arrogance when circumstances are working in their favor, or be plunged into depression or addictive behavior when life, as it inevitably will, takes a negative turn.

Anxiety, depression, grandiosity, and addictive behavior all have one thing in common:  they distract you from your experience of being in the present moment.

If you practice this simple tool you’ll find that you’re engaged in the moment, without being overly distracted by regret over the past or fear of the future.  You’re prepared with the optimal mindset to deal effectively with whatever life is throwing your way.  You’ll be more effective in every area of your life.  And your health will improve too.

Top Nutrition Doctor Confesses: My Eating Was Out of Control →