Chiropractic for scoliosis: Does it help?

But read further if you’re interested in a more nuanced response.

What Are the Different Types of Scoliosis?

Scoliosis is a condition in which the spine shows an excess amount of side-to-side curvature. 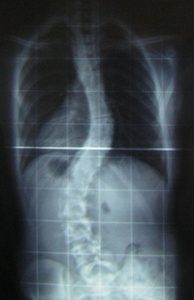 Sometimes scoliosis is due to muscle or neurological disease, fracture, significant leg length inequality, or some other underlying cause.

But much more commonly (80-85% of cases) there doesn’t seem to be any clear cause for scoliosis. Then it’s called idiopathic scoliosis.

Since the curves of idiopathic scoliosis most often become evident during your adolescent growth spurt, this usual type of scoliosis is called Adolescent Idiopathic Scoliosis or AIS.

AIS isn’t just  found in adolescents. If you’re an adult with scoliosis, and your curves began during adolescence, you still would be considered to have adolescent idiopathic scoliosis.

The measurement of “Cobb’s Angle” is the most common way to grade the severity of scoliosis. Here’s a diagram of how it’s calculated:

Up to a Cobb angle of 25 degrees, scoliosis is labeled mild. If your curve is 25 to 40 degrees it’s considered moderate. And above 40 degrees, the condition is termed severe.

Doctors are also concerned with whether a scoliotic curve is stable or if it’s getting worse.

In most cases, mild or even moderate curves in adolescence won’t progress over time. Sometimes they actually diminish.

But the opposite can also happen. During the rapid growth period of adolescence, scoliosis can increase.

When AIS is present in a skeletally-mature adult, the general medical assumption is that the curve is stable. It’s unlikely to get much worse.

Scoliosis is like many other types of spinal anomaly. If it’s mild or moderate, it doesn’t always cause problems.

On the other hand, if you are having symptoms related to your scoliosis, there might be a way of alleviating the symptoms even though the underlying degree of scoliotic curve remains unchanged.

Can Chiropractic Help With Scoliosis?

The typical medical approach to mild adolescent idiopathic scoliosis is just to watch and wait. Perhaps a series of periodic Xrays is taken to see if the curve is progressing. The majority of children with mild AIS will never experience significant progression or troublesome symptoms.

Many chiropractors feel that a program of spinal care is beneficial in mild AIS to minimize the likelihood of progression. In addition to spinal adjustments, doctors of chiropractic may incorporate specific bracing and traction techniques in an attempt to counter-balance the curves, spinal exercise to maintain flexibility and promote symmetry, the use of heel inserts to equalize apparent leg length, and other methods.

Unfortunately there’s not strong research to show that these measures make a difference in curve progression in scoliosis.

I’m skeptical that spinal adjustments alone would make much of a dent in scoliosis. But my extensive chiropractic experience leads me to believe that a more comprehensive approach could be beneficial. It should help maintain flexibility of the spinal joints and balanced use of the muscles.

But your doctor of chiropractic shouldn’t be trying to justify an extensive program of care by creating fear that scoliosis will get worse – often it doesn’t – or by making an unsupportable therapeutic claim that chiropractic can reduce scoliosis.

For moderate to severe AIS, medical treatment is usually implemented. With moderate scoliosis, a typical protocol involves specialized spinal bracing to maintain pressure on the vertebra over long periods of time – something like orthodontic braces for the skeleton.

In cases of severe scoliosis, or when bracing isn’t effective, corrective surgery is an option.

Given the lack of research backing it up, it would be hard to justify a program of chiropractic treatment as an outright alternative to the standard medical approach.  But it seems logical that a comprehensive chiropractically-managed conservative treatment program could offer additional support in moderate or severe scoliosis too.

P.S. – although bracing for scoliosis is well-researched, the use of surgery, although long-established, suffers from a lack of adequate research backing it up.

For adults with AIS, a comprehensive conservative chiropractic care program can be very effective in helping you manage symptoms associated with scoliosis such as pain or movement limitation.

There are many accounts of people reducing their curves by undergoing this type of treatment, and it could very well happen for you. Yet, without further published data, I feel it would be inappropriate for a doctor of chiropractic to suggest that his or her methods will result in a change in the magnitude of your scoliosis curves.

However, if your goal is to manage your symptoms effectively, maintain the free and easy motion of your spine, and improve your posture, pit your confidence in your chiropractor. We’re the experts.

← Shocking, Inappropriate Use of Chiropractic Methods in Spondylolisthesis Treatment Recent research confirms value of chiropractic methods for back pain →